On Friday, December 9th, the Carolina Forest Drill Team headed to Hope Mills, North Carolina, to participate in the Gray’s Creek Drill Meet. The competing drill routines of the meet consisted of an Armed Exhibition platoon and squad, an unarmed exhibition platoon and squad, an unarmed squad and platoon, and lastly armed squad and platoon. Soon after all schools presented their routines, the physical training part occurred and included events such as a tunnel crawl, eight-man sit-ups, and a 16 by-100 relay race.

After each school completed its drill routines and the field physical training (PT) portions, judges called up all participating cadets to play knockout, where cadets closely followed and executed commands. Judges removed those who failed to perform any commands correctly. The final three cadets receive a medal showing their accomplishment of placing in Knockout. The winning cadets for Unarmed Knockout: J. Markey, M. Praet, and E. Menzer, were all from Carolina Forest NJROTC, with E. Menzer taking first place in Armed Knockout.

Nearing the end of the drill meet, the judges tallied the scores from the drill routines, field PT, rifle scores, and the academic competition. The judges determined the final scores and gathered each school to fall into a platoon to prepare for the awards. Our school took first in air rifle scores, the tunnel crawl, the Armed Exhibition platoon and squad, and the unarmed squad. In addition, we received 2nd place overall for the field PT, the academic competition, eight-man sit-ups, the 16 by 100 relay race, Colorguard, unarmed exhibition squad and platoon, and armed platoon. In the end, our Drill Team worked hard and persevered, and without all the cadets, we wouldn't have achieved taking second place overall! 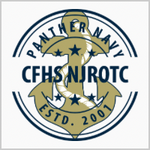 Welcome to the Official CFHS NJROTC page! Subscribe to us for more insight about the program, teams, and the latest news. If you have any questions, contact us at CFHSPublicAffairsOfficer@gmail.com
Myrtle Beach, SC
Previous Post
Next Post